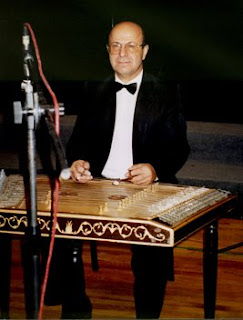 When I was in Urla (40km from Izmir), Turkey in the summer of 2006 I have exchanged gifts with Muammer Ketencoglu (I talked to him about part A’ of “Lesvos Mas” No51 in Greece) and he gave me a CD that immediately took my attention from all the others. It was a CD with Turkish santour, with tunes, that had the same roots with Lesvos music. It was in fact music from the Ottoman period, with Zeybek, Karsilama, Sirtos, Longa tunes. When I listened, I thought about the old limbo and where all these brought up to! Αll instrumental tunes. It reminded me the CD of Dimitris Kofteros “Santouri of Mytilini”. When I asked a friend from Izmir to learn about the santour player, he offered me to go and meet him. We went to the Director of the Izmir Choir for Classical Turkish Music, Mr. Guner Ozkan, he called him up, but unfortunately he was busy with a Doctor Obstetrician, he wasn’t able to meet. Instead, this article interview was made through e-mail.
(This Interview was made in 2007 and previously published in the magazine of Lesvos "I Lesvos mas", also Dr Umit Mutlu with Derya Turkan did finaly give a concert in Lesvos July 2007)

Biography
He was born in Ankara in 1939. While he was a student at Istanbul Medicine Faculty during 1960, he took Turkish music lessons from Istanbul Municipality Conservatuary. In 1963, he attended to Classical Chorus after the invitation of Dr. Nevzad Atlig from Istanbul Radio Classical Chorus as a kanun player. Within the ensembly of Istanbul Radio he worked with Kemal Niyazi Seyhun (kemence), Cevdet Cagla (violin), Vehice Daryal (kanun), Niyazi Sayin(ney) and Sekip Ayhan Ozisik (ud). With the inspiration he got from Conservatuary artist Husnu Tuzuner he started to be interested in santur and he started to work with a santur that he brought from Iran. He developed a new accord system with Iran santur that is more appropriate to Turkish music by adding pins. He was well aware of the missing methods regarding to teach and to learn Turkish Music instruments so he published “Kanun methods” in 1985 that he worked on and developed for long years. The same work has been republished in 1998 with additional exercising technics and analysis. Umit Mutlu continued with music and his researchs on santur even when he was in Germany during 1975-1989 for his medicine carier. Since 1963 he has composed 39 songs. His “Yesil gozlerinden muhabbet kapt?m” song has been chosen as the song of the year thru public voting by Milliyet newspaper in 1975 and has been sang by 10 diffrent singers. Being the brother of singer Serap Mutlu Akbulut, Dr. Umit Mutlu has been working as kanun and santur player for Ministry of Culture Izmir Governmental Turkish Music Chorus since he returned back to Turkey in 1991, joining to concerts with his santur to perform examples from Turkish and worldwide music. 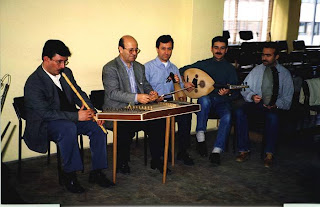 The group of Dr Umit Mutlu in the choir for Turkish instrumental music.

Interview with Dr Umit Mutlu
It is said that in Turkey the santouri is forgotten, what is the reason of this situation, and what is its current place?
When I began to play my first Iranian santour in 1967, there were two players whose name were well known. The chord system of their santours were almost the same to the Greek one's. Being constructed in this way these santours were not too suitable for playing Turkish tunes and therefore did not spread much. I adapted the system of the kanun (mandal) to the santour to overcome this problem. Since I have lived for quite a long time in Germany, unfortunately I did not have the possibility to introduce and spread this new type of santour. In 1989, when I returned to Turkey I began to develop this instrument. Being a member of the Izmir State Choir for Classical Turkish Music and further by performing on concerts I tried to introduce this instrument. Currently santours with the new chord system adapted by me, are being constructed in Istanbul and also been sold to the USA. I can not give a forecast on what kind of development this santour will go through after me, but during the past 15-20 years the number of santour players has increased.

Why have you chosen this musical instrument to expose your music instead of the kanun that is widedly spread in Turkey?
I decided to choose the santour as my instrument, because I liked its sound. In the beginning it was more a kind of curiosity and interest, which turned into a love towards this instrument. Further I am the only professional player among other santour players and I have dedicated myself for the continuation of it.

The tunes you have selected in your latest CD are very old and similiar to the music of Lesvos. Do people dance with this music, with Karsilama and Zeybek music in weddings, or festivals?
The tunes you've heard on the CD may seem very old to you, but actually these tunes are still current tunes played in Turkish Folk Music as well as in Turkish Classical Music. They are often played in folk music and people use to dance to these tunes, i.e. Zeybek, Karsilama etc., especially in the Aegean region.

You are a player of kanun and have written a method for it, have you use any techniques of the kanun in your santouri playing?
Though there are similarities between the kanun and the santour in respect to the body, the chord systems are different. The playing technique for the santour is also different, but I also use the kanun technique sometimes, which gives a different tune compared to the classical santour playing style.

What are the differences between the Turkish and the Greek Santouri?
As you may already have seen on my website, until the adaptation of the new manual chord system, a different chord and string system has been used. With the help of these mandals intertunes used in Turkish music, can be fully played like it is with the kanun. As far as I know the Greek santour is used with a chord system of half tones. This is why there is a difference of tunes between the Turkish and the Greek santour. If we have the possibility to meet in Lesvos, I'll be glad to show and explain you the system in detail.

If you would get an invitation, would you play In Lesvos Island?
We will be glad to introduce our music and the Turkish Santour, if you decide to organize a meeting and send us an invitation. We will be able to come with the same group, which is noted on the CD, i.e. Kemence (Derya Turkan), Santour (Umit Mutlu) rhythm (Mehmet Gultekin- KAF Music Producer). We also might bring our CD including with the introduction for the people who are interested. The Director of the Izmir Choir for Classical Turkish Music, Mr.Guner Ozkan, has a collection of historical Turkish instrument. Maybe a part of this collection can be exhibited on Lesvos in case of interest. Further I will also have the chance to examine the Greek santour, during our stay at Lesvos. 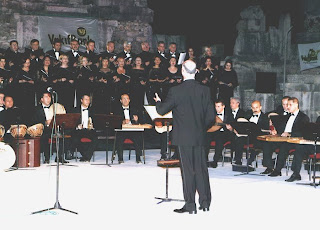 The last concert of Dr Mutlu with the choir which was held in antique theater in Ephesos in summer 2004. 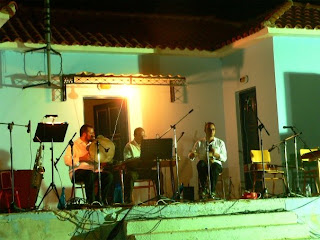 Very nice introduction and interview.Thank you Panos and thank you Dr.Mutlu, santour is unfortunately a forgotten instrument in Turkey

Thank you very much for including the interwiev other information about me in your blog.

I hope you have the chance to meet again one day.

Are your santour and the indian 'santoor' the same?