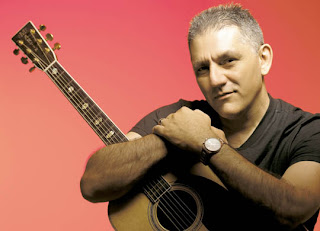 Born in Volos city 1957. His father a refugee from Smyrni worked there in an oil company. He is the second child of the family. Due to work they finally settle in Athens and the suburb of Nea Smyrni. At school he meets Odysseas Tsakalos, who will be the main partner to create the first group called "FATME". He has been influenced by the songs of Hadjidakis with Nana Mouschouri, Frank Sinatra, Yves Montant, also some classical music. Via his brother he listens to the Beatles, Jimmy Hendrix and also the LP "Perivoli Tou Trellou" by Dionisis Savvopoulos.
After entering and playing in various small bands, he finally forms the group FATME in 1979-80 and they record their debut LP "FATME", followed by PSEMETA, RISKO, BGAINOYME APO TO TOUNEL, TAXIDI, PALKO.
From 1990 he has followed a solo carrier and has released more than 10 personal LPs/CDs. He is regarded as a prolific songwriter, with songs that are constantly awarded the song of the year, and he still continues to compose and perform live. Some of his very known songs: TA KARAVIA MOU KEO , KALOKERAKI, PES TO KI EGINE, IPARHEI LOGOS SOVAROS, PSEMMATA and others.

More information on his website (in English and Greek)
http://www.portokaloglou.gr/

very nice voice and interesting work!worth to listen all!