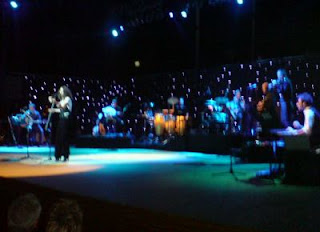 The power of music is unique, over obstacles and bridges. Even if the words are not understood, music, rhythm, and the movement of the artist on stage can bring people together. This was the concert of Elefteria Arvanitaki held on Tuesday night in the 16th Jazz Festival of Smyrna.
The Greek General Consulate of Greece in Izmir in collaboration with the Cultural Foundation of Izmir and the crucial involvement of Samos Prefecture, made this special concert-the first foreign-hosted at the brand new Centre of Arts - Ahmet Adnan Saygun Smyrna. 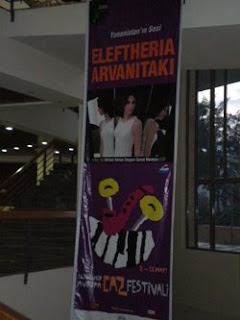 For 2 hours the Greek artist and the orchestra offered unique moments, winning the applause of spectators from Turks and about 60 from the Greeks of the Island of Samos who attended the concert. Indeed, the Greek Consul, Ms Hara Skolarikou described as a personal stake and all of its Consulate General in Izmir to contribute significantly to bring the two peoples of Greece and Turkey.
«The full hall of brand Mansion Art show that we approach our goal. The Jazz Festival is a very important institution that has operated for 16 years in Smyrna and want to publicly thank him for the invitation sent to us. It is the result of the excellent cooperation of many entities from both sides», added Ms Skolarikou saying thanks.
Satisfaction for the cooperation was expressed by the chairman of the Cultural Foundation Smyrni Filiz Sarper, she wished that cooperation will continue.

«You made me feel young» 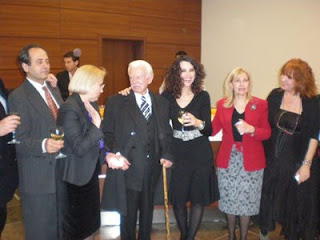 The greatest gift to the Greek artist was from the 88 year old Turkish Cretan origin.
«Tonight with your songs Eleftheria, I felt young again!», said Abidin Bayraktaroglu visibly excited after the concert.
«I was born here in Smyrna, but I am from Heraklion Crete. When I was a kid I was singing Greek songs. “To gilekaki” “Samiotisa”, “Kanarini mou glyko” ... The people in both countries and both sides of the Aegean, love one another. I am 88 years old and I always have this love. »
-«Thank you Eleftheria Arvanitaki », said Mr. President Bayraktaroglu Turkish of the cultural association Cretan and Greek-Turkish Friendship Association.
«It is the first time playing in Smyrna, a jazz festival with great contributions and I am delighted that the Greek Consulate and the Prefecture of Samos made it reality», said Eleftheria Arvanitaki.
We have the warm applause from the audience, although most do not understand the lyrics of the songs.
«You know, when you go out of your country, you are performing not only yourself but also other colleagues, what is essentially standing in the people is feeling the music and the singer on stage, the melodies, the way it tries to contact with them.»
«This is the magic of music, this role is always the art among the people, it can make them communicate, it can be done even for a moment to forget differences, they can be forgotten for a moment from the everyday and waken », Eleftheria Arvanitaki noted.
Satisfied with the event, expressed by Samos Prefect Manolis Karla.
«The concert of Eleftheria Arvanitaki in Smyrna surpassed all expectations. This shows that there is a dynamic between the two countries to invest in peace, cooperation and friendship. We support all the dynamic forces that are here tonight. But our fight for peace, cooperation and progress is daily, it gives the roots and fruits and a future perspective», said.
And indeed the Samos Prefecture not only lived the Smyrna Jazz Festival, during his stay in Asia Minor, but also Capital Mr Karla met the President of the Izmir Foundation for Culture to consider the potential to become events at Ephesus and Samos along together with the National Theater.
«We are in a parallel search of capabilities of establishing more cultural events between Turkey and Greece, for example in Samos, in the year of women writers. Because of the origin of the Aydin Dido Sotiriou and the relationship he had with Samos enabled the two peoples to express themselves through a more permanent literary and cultural event.
Our goal is through the exchange of culture to open roads and to create opportunities for our people», said Samos Prefect.