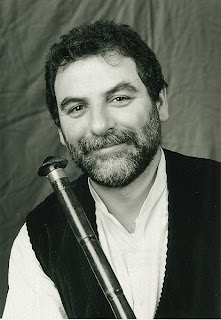 Kudsi Erguner comes from a family of musicians. Though his meetings with many master players of the older generation, he has been able to steep him-self in the authentic Ottoman style, the reflection of the centuries of musical culture. He is the only Turkish musician of his generation to have been taught directly by his father in the art of the Ottoman classical music, in the old oral traditional of transmission from master to pupil. His attendance at meetings of Sufi fraternities, has enabled him to follow their spiritual and musical teaching. Among his many activities, he was a permanent member of the Istanbul Radio Orchestra. In 1975 he went to live in Paris, where he successfully completed his studies in architecture and musicology. He has given numerous concerts in the USA and in Europe, bringing Ottoman classical music and Sufi music from Istanbul to the attention of Western audiences. His research into Indian, Pakistani and Turkish music has led to his recording some rare, authentic musical genres, later released on record in Europe, whilst in Turkey he’s founded special ensembles to play styles of the music virtually forgotten since the move towards modernization swept the country. He has written the hagiography of a 13th century Sufi master, Haji Bektasi Veli, as well as a book of tales and parables based on the highly important work of Jalaluddin Rumi, and I yet another of his books, an autobiographical work, he’s written an unusual testimony about the conflicts arising from the clash of old, traditional cultures, especially that of Sufism, with modernity. His large discography of CD’s released in Europe, the US, Japan and Turkey offers panorama of his authentic style coupled with his genuine creativity, whilst offering real insight into the different facets of the Ottoman music. Since 1990, he has made regular appearances at the Istanbul Music Festival, where his concerts have aroused increasing interest amongst the younger generation and played a large part in the return to sources, i.e. to the traditional arts, especially those linked to Sufism. He has worked with major European artists from different disciplines, including Peter Brook, Carolyn Carlson, Maurice Bejart, Peter Gabriel, George Aperghis, Didier Lockwood, Michel Portal… In 1981 he created the Mevlana association in the Paris, where he now teaches the Sufi tradition and classical music. He is also the director of two small communities, one in Paris and the other in Istanbul, linked to the Mevlevi tradition.
Information provided by the booklet of the CD “Kudsi Erguner – The Ottoman Heritage (L’heritage Ottoman)