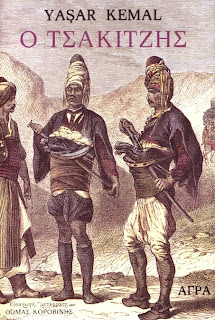 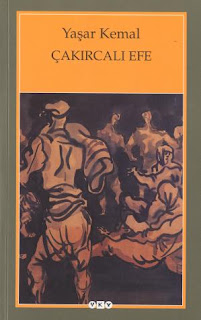 Greek book title: Ο Τσάκιτζης Tsakitzıs
Turkish original title: Çakırcalı Efe
Author: Yaşar Kemal
ISBN: Greek edition 960-325-114-3, Turkish edition: 9750807243
Language: Greek, Turkish
Year: First edition 1971 (Turkey) Greece 1994
Publisher: Turkey: Yendi Baski, Greece: Agra
Greek Translation: Thomas Korovinis
Description: The life and time's of the legendary Tsakirlatzi (Çakırcalı Efe) "Robin Hood", bandit, rebel in the late times (?-1910) of the Ottoman era. The most famous rebel-bandit, of all, that lived of the Aegean cost line of Asia Minor. His revolt against the Ottoman power, his actions against the rich, made him a legend, among the peasants and the poor, who could not fight and find justice with the state, and the money holders. This made him a legendary hero. His adventures, his passions, became myths, subjects for, popular booklets, Karagiozi, theatre, cinema, in both countries of Greece and Turkey. The author includes all the stories he heard, and read, and made this novel, the gives a good aspect, of his life, the region the many fights, killings, and his final death.
Comments: A book that shows the real life of the most famous Zeybek Tsakitzi. A sharp and very intelligent bandit, who escaped many times the attacks of the drafts of the Osmali forces,
and humiliated them countless times.
Gönderen Panos Agiakatsikas zaman: 10:14