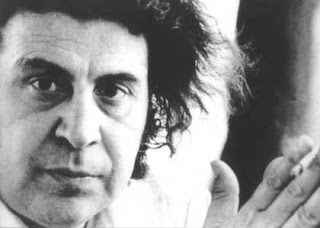 Mikis Theodorakis of Cretan descent was born in Chios Greece, 29 July 1925. He lived in many cities in Greece before setting in Athens, where he now lives.

From 1954 to 1960 he worked in Paris and London composing symphonic music, ballet and film music. In 1960 he places himself as leader of the regenerative cultural-political movement in Greece centered on the union of poetry and music, composing dozens of song-cycles, oratorios, revues, music for the ancient Greek drama and other. This movement was connected with the progressive political forces of that period, which aimed, beyond the establishment of democratic life in Greece, to a much deeper and broader rebirth of the Greek people. This brings him often at the center of political life, climaxing with his active participation in the resistance movement against the military dictatorship (1967-74).
Theodorakis wrote for all musical forms. His work, rich and versatile, transcends the limits of music and covers areas such as poetry, prose, philosophy, musicology, even political essays.
The first period of his musical creation (1940-53) includes songs, oratorios, chamber music, ballets and symphonic works, the First Sympony being his most significant work.
The second period, the Paris period (1954-59), includes chamber music, ballets and symphonic works, the major work being the ballet Antigone commissioned by Covent Garden in 1959.
The third period, 1960-1980, is devoted to the popular music. Outstanding works produced are the oratorios Axion Esti and Canto General.
There follows the fourth period, 1981 to 1988, during which, while composing song-cycles, he returns to the symphonic music. Most significant works written are the Third Symphony, the Seventh Symphony, his first opera Kostas Kariotakis (The Metamorphoses of Dionysus) and the Zorbas ballet.
Finally, during the fifth period (1989 to date), he composes three operas (lyric tragedies) Medea, Electra and Antigone. This trilogy is complemented by his new Opera Lysistrata. With these works Theodorakis ushers in the period of the Lyrical Life, that is, his complete turn to lyricism and perfection of the lyrical musical expression within the total range of his musical achievement.

Information from the booklet of the CD "The very best of Mikis Theodorakis Vol.1"