One of us: Interview with Serap Tamay

Here is an interview made with Serap Tamay, a musician from Izmir, a friend and member of GreekTurkish friendship groups. Zuhal Okuyan asked the questions. 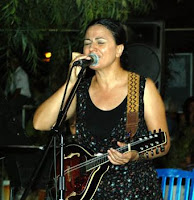 Tell us something about yourself…
I was born in Ankara. I have been living in Izmir since about twenty-five years. I finished State Turkish Music Conservatory and I am a music teacher.
How did you change your musical interest from Turkish Music to World music?
As a child, I was raised in a family where everybody sang or played some musical instrument. My grandmother played the garmon (a Circassian accerdeon like instrument), my father and mother also sang and my father had a very large repertoire of Circassian songs. So I have grown up in a musical environment. In 1989 I met İsmet Tezcan (my husband) and Hüsrev Öztürk and we formed a group called ‘Group Günberi’. At first we sang some songs from Aegean Islands and some latin songs and gradually our repertoire expanded and included many cultures and languages. As Group Günberi, we gave many concerts called ‘From New World to Mediterranean’ and made the music from Latin America to Spain and Portugal and to Balkans and especially Greece.We extended our musical journey to Rembetiko and Anatolian Folk music.We wanted to share with the audience the universal language of emotions in different languages. Each country has a different colour and I wish to sing in all languages if possible!

Can you please also mention the musicians you have worked with?
I had the chance of working with very good musicians.Ismet Tezcan, apart from being my beloved husband is a very good guitarist and composer, our good friend Husrev Öztürk (whom we lost very early couple of years ago), others like Ömür Gidel (arrangements) Funda Meyer (flute) Ali Aliyev (bass guitar) and Alesker Abbasov (keyboard), Zeynep Tamay (viola), Hasan Telkıvıran (flute), Ali Ozturk (guitar), İlhan Çınar (violin), Onur Topoğlu (cello), Tolga Kulak (violin) and many other good musicians…
Can you also say something of Ismet’s music?
Ismet has composed a lot of music. Some of them are children songs, and we are planning to make a children song book project. He also got prizes in some competitions.There are four songs he composed in our first and only work in the market, the album called "Canım Terkeyledi Beni" ('My Soul Has Left Me'). We are working on new songs; my friend Zerrin Kurtoğlu writes the lyrics, İsmet composes and I sing! I am looking forward to sharing our new work with my friends!

And also you had TRT days?
Since 1989 we have participated in many programs of TRT (Turkish Radio Television). In TRT-2 we made programs for a long time for the program called ‘Muzik Mozaik’. Also with other important programs we had the chance to make our music heard country-wide and everywhere in the world where they watched TRT.
What are you doing now?
We continue teaching. Ismet is a guitar teacher in Fine Arts High School. I am also writing a book called "History of Western Music" for schools with a group of friends.
We know your interest in contributing to peace between two countries and more than that you have been singing in Greek for a long time in many concerts. Since when have you been singing rebetiko music?
Since 1990. There are many stories in this part of the world we live and Aegean stories are an important part of them. By singing these common heritage songs, we want to make everybody to feel and think about peace, friendship, love, brotherhood…I think this music is a treasure and will help us to create and promote peace on two sides of Aegean water.
What do you think about our Turkish Greek friendship groups? Do you have any comments or suggestions?
Last year in Karaburun and Mordoğan we had the chance to perform with other Greek and Turkish musicians and shared our emotions with the audience. I think everybody was very happy and excited. I hope this Greek-Turkish Friendship activity continues.Very good musicians have come together. A real friend Panos Agiakatsikas and his beautiful daughter Myrsini, Themis Patilas, Fotini Banou with wonderful voice, dervish-hearted and beloved Dimitris Alexakis and Aris Kotsas, Muammer Ketencoğlu, Deniz Ketencoğlu, Fulya Özlem, Salih Nazım Peker, İbrahim Sivrikaya,Aykut Yalçın …..also contribution of you, Özlem Yaşayanlar, Filiz Korkmaz, Tahsin İşbilen, Işın Turgut...Also both mayors of Karaburun and Mordoğan really believed in Greek-Turkish friendship and facilitated the realisation of this event.
We are already preparing for this summer’s event and thanks to dear Panos, Filiz, Çağatay and Aris enlarging our common repertoire. I would like to thank them here. I would like to take part in and support every work to develop our friendship. There must be concerts, exhibitions, film performances, literature discussions, visits to both countries to develop this friendship. I also propose a newsletter in future (although this blog serves for this purpose, for reaching more people). Also a catalog of activities would be a nice idea.We need sponsors of course!
Which greek composers and artists do you like most?
Markos Vamvakaris, Vasilis Tsitsanis, Giannis Papaioannou, Kostas Skarvelis, Apostolos Kaldaras, Manos Loizos, Manos Hadjıdakis, the composer Mikis Theodorakis……. Roza Eskenazi, Marika Ninou, Rita Abadzi ….Moreover, George Dalaras and Haris Alexiou. I love them all. I am very happy I have listened to them all.

For the last, I thank you my dear friend Zuhal, as one of the architects of this beautiful group and events…..
Love and greetings to all friends. 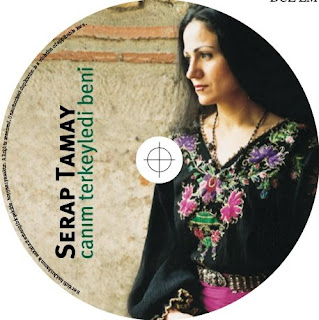 Thank you Serap, thank you Zuhal,...
love this interview!!!

Congratulations, very good and emotional interview...
Thank you very much