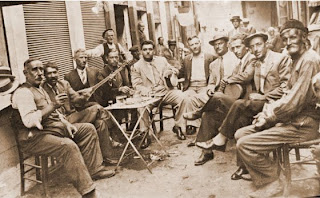 Rebetiko music succeeded, and followed the steps of the Smyrnaic, Constantinople and Asia Minor originated music after ~1930 until the mid 50's. This can be analyzed with the maqams used, (Nihavend, Hicaz, Kurdi etc) the rhythms hasapiko (slow 2/4), Hasaposerviko, Zeybekiko, Karsilama. etc, and the taxims. Even though rebetiko music was "bubling under" in various places in Athens and the port Pireuas, it is considered by most without a doubt that Markos Vambakaris and his recordings paved the way to introduce this music all over Greece and to influence other artists to start to record in this direction. The popularity made the record companies welcome this music as a gold mine, as previously it was unacceptible music of the underground. Vamvakaris started with others and had huge succes playing in Pireuas. Many of the songs they made praised the use of hashish, and the hash dens where they smoked and played for their pleasure. Also the instrument used to play the songs - the three stringed bouzouki - was only played by the marginals, and was often chased by the police, along with the hashish. So by these means it is music of the underworld, that had an appeal to all non class people. The term "Rebetiko" was not used to define these songs at that time. From the period when they were at their peak, scattered publications have been found and the term "Rebetis" is now used to describe those people of the underworld, who always sang the "hasiklidika" songs. The word itself, was given various meanings, but the description of these songs was widely given in 1949 by Manos Hadzidakis who penned this term in a lecture. After this the term was spread, and later (over) used by companies to describe this music.
Markos Vambakaris' (born in Syros island) popularity, except from himself, was also introduced at that time (1933) with other "rebetes", with whom he formed a group "thriliki tetras" (legendary fours) in Pireas (port of Athens). Other than Vamvakaris, the group consisted of Giorgios Batis (born in Pireas), Stratos Pagioumtzis (born in Ayvali) andAnestis Delias (born in Smyrni died from heroin).
Today there are probably more than 40 books written only in Greece on the subject of "Rebetiko", which analyze many aspects of it. Major artists that are noted in the huge number songwriting and recordings are Markos Vamvakaris and Vassilis Tsitsanis. Major singers are considered, Giorgos Kavouras, Apostolos Hatzihristos, Stratos Pagioumtzis, Kostas Roukounas. Women singers, Rita Ambatzi, Roza Eskenazi. Important composers, Vaggelis Papazoglou (born in Asia Minor), Giannis Papaioannou, Spyros Peristeris (born in Smyrni), Panagiotis Toundas (born in Smyrni), Giovan Tsaous (born in Asia Minor). At the end of the rebetiko era great composers are, Apostolos Kaldaras, Giorgos Mitsakis.

Recordings
These suggestions are made with the possibility you will find them in Turkey
1. Rebetika 1918-1954 (Kalan) - A very good compilation produced by Muammer Ketencoglu, with Turkish notes.
http://www.kalan.com/scripts/album/dispalbum.asp?id=193
2. Yeni Turki - Kulhani Sarkilar - Very nice rebetica versions in Turkish
3. Kudsi Erguner - Rembetiko from Istanbul. Not to be considered a rebetiko based CD, but rather the connection of the the Turkish music and Rebetiko.
From JSP Records (excellent selection and quality of 78's)
4. Rebetika "Greek Music from the underground"
http://www.amazon.com/Rembetika-Greek-Underground-Various-Artists/dp/B000FOQHJO
5. Rembetika Vol.2: More of the Secret History of Greece's Underground Music
http://www.amazon.co.uk/Rembetika-Vol-2-History-Greeces-Underground/dp/B000YRZ1WG
6. AJS Music company, check out their two rebetiko boxes (Turkish production)
http://www.ajsmuzik.com/

List of the names and music examples mentioned in the brief introduction to rebetiki music.