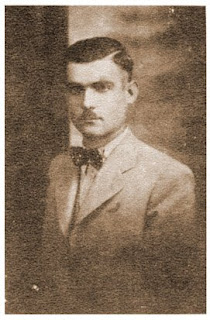 Kastellorizo 1909-Athens 1943, originating from Asia Minor Livisi. Folk singer and musician, one of the most prominent voices of pre rembetiko. Grew up with the Dodecanese and Smyrneika songs that he learned when he was young from the music band of his father’s, also from the musician Stamatis Kavouras. Played the santouri, violin and guitar and started as a musician of the Smyrneikon songs. Meeting the Smyrnian musician Gianni Hatzi, he entered the band of Stellaki Perpiniadis and Kostas Nouros, playing the santouri and violin. By this music group he is known in Drapetsona and Kokkinia suburbs of Athens. But at that time he had not begun to sing yet. With the inducement of Stellaki, who knew his abilities in singing, tentative timid beginning, they both sang on the same stage with huge success. Another person who urged him to sing was Vangelis Papazoglou. He gave his two 'Paidi tou dromou' and 'Ainigma' songs to Kavouras which were then to become some of his first songs. Later in the music scene he has become known now singing almost exclusive compositions of Kostas Skarvelis (in total 43) and recorded 69 songs in the period 1936-1940. In 1940 he died at age of 34. His death even made the great Marcos Vamvakaris dedicate to him a memoriable zeibekiko song called "Kavouras".
Panos

Pono den me lipase is my favorite..

Im hurt dont you feel sorry for me???