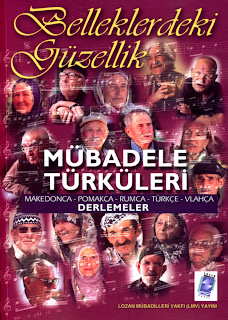 Book title: Beauty in Memories-Songs of the Population Exchange -Belleklerdeki Güzellik-Mübadele Türküleri
ISBN: 978-975-979005-3-0
Language: Turkish
Year: 2007
Publisher: Lozan Mübadilleri Vakfı (LMV) yayını (Publication of the Foundation of Lausanne Treaty Emigrants)
Description: This book is the outcome of a project aiming at protecting the traditional language and culture of the Lausanne Treaty Emigrants, raising an awareness of cultural diversity in Turkey and encouraging cultural tolerance. To accomplish this, LMV (Lozan Mubadilleri Vakfı) project coordinators, along with BGST (Boğaziçi Gösteri Sanatları Topluluğu) - Kardeş Türküler, have interviewed 90 emigrants and children of emigrants in parts of Turkey for 8 months and compiled the traditional songs in their memories. The songs appear in Greek, Turkish, Pomaki, Macedonian and Vlach languages. The book provides musical scores to some songs and it also includes a CD in which the interviewees sing some of the songs.
For more information:
http://www.lozanmubadilleri.org.tr/
http://www.lozanmubadilleri.org.tr/greek.htm
Two songs from the CD:
http://www.4shared.com/file/86988034/1f4409c6/Mubadele_Turkuleri_-_samples.html
Gönderen Filiz zaman: 15:51

What does the title of the book mean?

"Beauty in Memories - Songs of the Population Exchange"