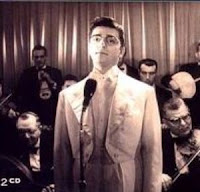 Zeki Müren, a prominent Turkish singer, composer and actor, was famous for his compelling voice and precise articulation in his singing of both established Turkish classical music and contemporary songs.

Müren grew up in Bursa in western Turkey in 1931. From 1950 to 1953 he studied decorative arts in Istanbul at the Fine Arts Academy while launching his musical career. “Bir Muhabbet Kusu”, his first single was a sold-out. He was given “the Golden Record” award for another song called “Manolya”. His first musical film “Beklenen Sarki” received the success it deserved. Zeki Muren made 18 consecutive films with all great success. He always proved that he could be and was successfull in all branches of art including poetry, design, composing.

When he accepted to go on stage in 1954 he knew he had to be special and in appearance in paralel to his skills. Thanks to his earlier education at the Fine Arts Academy he introduced many novelties on stage set-up and instruments used. His next step was to wear new style clothes on stage entirely of his own fashion.One of his novelties was to apply a “T” shape stage for the first time in Turkey so he could mingle with his beloved ones. His manner of adressing people and his perfect pronunciation of the Turkish language was superb. That was the reason why he was unparallelled in maintaining dialogues with his audience on stage.

In 1955 he appeared at the Küçük Çiftlik Gazinosu, one of the three best-known night clubs of Istanbul in those years, where he was accompanied by such famous instrumentalists of Turkey as Selahattin Pınar, Yorgo Bacanos, Sadi Işılay, Hakkı Derman, Şükrü Tunar, Feyzi Aslangil, Kadri Şençalar, İsmail Şençalar and Necdet Gezen. This series of night club concerts created great popular interest. Müren continued his concerts for many years. He was Turkey's most regular and frequent concert giver. He gave thousands of concerts, and actually the number of his concerts has remained an unreachable record. There have been times during which he gave one hundred concerts a year.

In his forty-five-year professional career Müren composed more than one hundred songs and made more than two hundred recordings. “Zehretme hayatı bana cânânım” (acemkurdi) was his first song, which he composed at the age of 17. “Şimdi uzaklardasın gönül hicranla doldu” (suzinâk), “Manolyam” (kürdilihicazkâr), “Bir demet yasemen” (nihavend), “Gözlerinin içine başka hayal girmesin” (nihavend) are some of his most popular songs. He was celebrated as the "Sun" of classical Turkish music and was affectionately called "Pasha". For many years he reigned as "Artist of the Year". Many of Müren's records were also published in Greece, where he also enjoyed popularity, along with the U.S., Germany, and several other countries during the 1960s and 1970s.

Then, Zeki Muren started to fight health problems gradually. He preferred to lead a solitary life in Bodrum but that did not help to keep him out of eye in the press.In 1996 he passed away of a heart-attack .

Zeki Müren Art Museum, established in Bodrum, where Müren used to live, has been visited by more than 200 thousand people so far.

can be ordered online through : http://www.kalan.com/

8 of his popular songs are included in the following file:
http://rapidshare.com/files/99033275/Z._Muren.rar

Also, check the following videos for a closer acquaintance with his music, accompanied by scenes from some of his films: