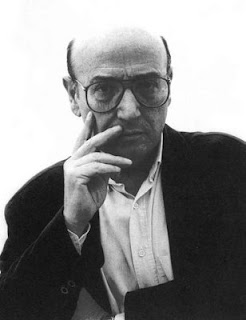 Theo Angelopoulos was born in Athens in 1935. After studying law, he attended courses at (the French school of cinema) "L'IDHEC" and then grew close to Jean Rouch. Back in Greece, he was hired as film critic for the daily Allagi, which was closed down by the military junta. He began working on Forminx Story, a feature-length film about a pop group in 1965 but the film was never finished. This was followed by Broadcast (Ekpompbi) a short he made in 1968.
In 1970 he completed his first feature Reconstruction (Anaparastassi). "Out of the story"s thriller-type plot," writes Jean-Loup Passek, "- an immigrant returning from Germany is murdered by his wife and her lover - emerges an ideological style and approach which sets the film quite apart from the conformism of Greek cinema of the same period. The crime itself is far less interesting for the filmmaker than the ins and outs, as well as the individual and collective implications, of the inquiry." The film won an award at the Festival d’Hyeres and got noticed in Berlin, calling the attention of critics the world over to Theo Angelopoulos.

His next three films make up a trilogy on the history of contemporary Greece. Days of '36 (Meres tou '36) takes place just prior to the election during which General Metaxas imposed his dictatorship. The film is about the sequestration of a reactionary Member of Parliament. The government hesitates several times, but the hostage-taker is finally killed and this murder foretells the greater repression to follow.

The Traveling Players (O Thiassos, 1975), received the International Critics' Award at the Quinzaine des realisateurs, at the Cannes Film Festival. Largely considered a masterpiece of modern cinema, the action centers around a troupe of actors touring Greece from 1939 to 1952. Functioning on the principle of "collective memory", the film deliberately ignores chronological principles, traveling at will through the recent and dramatic past, including the Metaxas dictatorship, the Nazi occupation, the Greek resistance and its various tendencies, the victory of the monarchy, the civil war, the defeat of the communists in 1949, and the 1952 elections.

The members of the troupe relate to each other on several levels - as characters in the popular story they are attempting to perform; through the psychology of their characters; and on an historical level, concerning their relationship to Greece and its evolution. They bear the illustrious names of the Atridae. "For the first time in the short history of Greek cinema," explains Tassos Goudelis, "a film makes a truly ambitious attempt to dramatize the ordeals of contemporary Greece. Allusions to the Atridae give the viewer direction, inviting him to take stock of Greece’s recent history – both political and social - in the light of a more global destiny, the roots of which reach back to ancient times. The tragic dimensions of the characters are explored in the conflict which pits them against reigning political power."

With this four-hour fresco, and then with The Hunters (I Kynighi, 1977), which begins with the discovery of the body of a resistance soldier by six hunters (introducing the story of Greek political history from 1949 to 1977) some of the thematic and stylistic constants of Angelopoulos' cinema were established - the weight of history, a clinical examination of power, a Brechtian theatricality, wherein the individual has no importance with respect to the group, a rejection of conventional narration in favor of an intentionally broken one, in which stationary cameras and sequence-length shots create an alternative sense of time.

Power is once again at issue in Megalexandros (1980), the story of a turn-of-the-century highway robber who attempts to reign as tyrant. Born of common folk, he is ultimately destroyed by the common folk. After making a short documentary in 1982, Athens, Return to the Acropolis, Angelopoulos collaborated for the first time with screenwriter and poet Tonino Guerra on Voyage to Cythera (Taxidi sta Kithira, 1984), which won the Cannes Festival's International Critics’ Award for best screenplay. We follow the path of a filmmaker who wants to make a film about his own father and who returns to the Soviet Union after thirty years in exile, a stranger in his native land. Through this story of a society in which all spirituality appears to have been banished, Angelopoulos expresses more generally his own disillusionment with democratic Greece. A quest for identity, quite clearly marked by Antonioni, replaces the study of the group. The voyage, usually a coming home and signaled by the crossing of a border, becomes a basic tenet of the filmmaker's writing.

The Beekeeper (O Melissokomos, 1986), the last trip of an old man who has left his family, then Landscape in the Mist (Topio stin Omichli, 1988), the voyage of two children searching for an imaginary father, pursues this examination of a world without spirit and direction. In the latter, which won the Silver Lion at the Venice Mostra, Theo Angelopoulos quotes explicitly from The Traveling Players through the character of Orestes, who meets the film's two heroes. His next film is The Suspended Step of the Stork (To meteoro vima tou pelargou, 1991). Set on the borderline between two imaginary countries, in the heart of a village overflowing with refugees, a journalist believes he has recognized a politician who had mysteriously disappeared. With this film, Theo Angelopoulos begins his bitter reflection on the loss of reference points in the world since the fall of the Berlin Wall.

In 1994, he began shooting Ulysses' Gaze (To vlema tou Odyssea), throughout the Balkans. Writing about the film, which starred Harvey Keitel, Andrew Horton says, "«Ulysses' Gaze is a triple odyssey. On one level it is a search for the roots of Balkan cinema and, really, of cinema itself. It is also a voyage through the history of the Balkans, leading up to and including the ongoing tragedy of Bosnia. Finally, it represents a man's individual journey through his life, his loves and his losses.» Ulysses' Gaze won the Grand Jury Prize and the International Critics' Prize at Cannes and was named "European Film of the Year" by the critics.

With his next film Eternity and a Day (Mia eoniotita kai mia mera) Angelopoulos finally won the coveted Palm D'Or in Cannes and represented Greece at the American Film Academy Awards. Michael Wilmington called Eternity and a Day "a visually spellbinding study of an aging writer's journey through the present and past.» while in VARIETY David Stratton wrote, "«Eternity and a Day finds Angelopoulos refining his themes and style. Just as the other great filmmakers have in the past explored similar themes time and again, so Angelopoulos has evolved and come up with one of his most lucid and emotional journeys thus far. 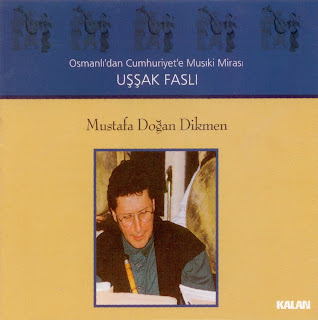 The Ottoman Fasıl Music
The Arabic word fasıl literally means “division” or “section”. It denoted a section of a collection of lyrics or notations arranged according to makams, or performance of secular compositions in one makam. Songs composed in the same makam but in different compositional genres constitute a fasıl program in concert. The classical Ottoman fasıl in its most matured structure included the following compositions: taksim (instrumental improvisation), peşrev (instrumental, prelude), kâr ( vocal composition having a rather free structure), murabba beste (vocal composition whose song-text is based on four lines), ağır semai (vocal form in 10/8), şarkıs (light vocal pieces in various rhythmic patterns), yürük semai (vocal form in 6/8, performed in faster tempo), saz semaisi (an instrumental piece in 10/8, a postlude). Excluding the şarkı, this sequence was probably established in the second half of the eighteenth century. The şarkıs began to be included in the fasıl concerts at the beginning of the nineteenth century. (For the whole article: http://www.kalan.com/scripts/Dergi/Dergi.asp?t=3&yid=9486 )

"I am not going to tell you here about the early 20th Century rebellions by the Efes and Zeybeks of Turkey's Aegean region, nor about their customs or heroism which gave headaches to the Sultan, instead, l will share with you what working on this album has evoked in me -- an album evolved from the song collections of the Zeybeks, to whom we owe the prototypes, which later grew in subject matter and number."
Muammer KETENCOGLU 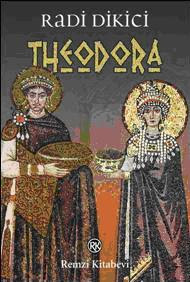 Haremde Neşe - Music from the Harem 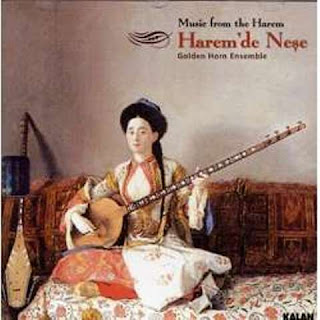 The Harem:Lexically the word connotes a sacred place where public entrance is absolutely forbidden. In specific usages of the word/ such as HAREM-İ ŞERİF the prophet's mausoleum in Medina is denoted, or in HAREM-İ HÜMAÛN women's guarters in the royal palace is referred to. In a general context it means a special space reserved for women within the social life of a tradional Turco-Islamic community. Though HAREM lost its inital mystery and enchantment with the passing of time, its currency is still retained at certain hocalities.Life in the HAREM varied according to time and place. Ordinary household practice was obviously differently than its counterpart in the palace. Like wise variations accordirg to difterend seasons/ months/ and days manifested an indead colorful atmosphere. (For the whole article: http://www.kalan.com/scripts/Dergi/Dergi.asp?t=3&yid=9506)