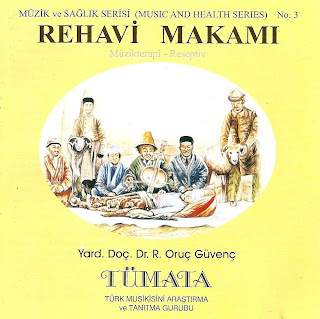 According to the view of experts who have done research on music; music existed before language. Abstract concepts, memory, symbols, associations, analogical relations necessary for conversation and speech have evolved and matured with humanity. Together with this, there is in every particle in nature, a unity of melody and rhythm which continues with great order and harmony. In the harmony and rhythm perfection of bird sounds, in the movement of atoms, electrons and galaxies and in the amplified sounds of the fluids of our body, we can observe the relation and association of music with the created world at large.

Curing with makam (Turkish tonality) music and treatment with these elements, which matured and established itself along with the Bakshi-Kam curing tradition and pentatonic music form which has an important place in Turkish culture and history of music and dance, has again revitalized itself in today’s medical arena. One thousand years ago in Central Asia, Farabi, Ibn-i Sina, Ebu Bekir Razi, Hasan Suuri, Hekimbasi Gevrekzade Hafiz Hasan Efendi and Hasim Bey have written works on makam music, which was developing and spreading in Horasan (Transoxiana) and Uigur Regions, and they described the relations of makams with feelings and organs of the body by classifications. While pentatonic music was continuing to develop in Turkic provinces, a different makam music based on a system of 7 notes, where one whole note was divided into 9 different sounds (komas), has contributed to our culture and art with a wealth of over 400 makams.

Ebu Bekir Razi, one of the great Muslim Turkish scholars, who lived between 834-932, in his work on the curing of melancholic patients tells us the following: “... melancholic patient must be cured through some sort of pre-occupation... melancholic patient should pursue a joyful hobby like hunting or fishing. He should get to know different kind of games. He should meet people whose character, behavior and morals he likes; and should listen to songs which are sung by beautiful voices.”

Great Turkish scholar Farabi (870-950) classifies the effects of the tonalities to the soul as follows:

Great Muslim Turkish philosopher and scholar Ibn-i Sina (Avicenna, 980-1037) defines the role music plays in medicine as follows: “... One of the most effective and best paths of curing is to increase the mental and spiritual strengths of the patient. To cope better with the illness, the patient should be encouraged, should listen to good music and should come together with people whom he loves.”

Ibn-i Sina states that, he had benefited greatly from the works of Farabi, and adds that he had learned music from him and applied it in his medicinal occupation. In his book ’Kitap’un Necat’ and ’Kitab’un Sife’ which he wrote in Arabic, 12. chapters are totally reserved for music. These chapters were translated by Baron Rodolph Dearlangar, and were named and published as ’La Musique Arap’.

In the works named ’Tadil-i Emzice’ of the ancient Turkish Doctor Shuuri, there is encompassing information about curing with music. Shuuri in his work ’Tadil-I Emzice’ states that at the different times of the day, different tonalities are effective.

According to Shuuri, different tonalities affect the different gatherings of people:

Nine centuries before our time in the Nureddin Hospital in Damascus, which was built by Seljukian Sultan Nureddin Zengi, musical tonalities were used to cure patients.

In later times, curing with music was implemented in Amasya, Sivas, Kayseri, Manisa, Bursa, Istanbul (Fatih Kulliyesi) and Edirne hospitals. We find the following written in Evliya Chelebi’s travel chronicles: ”The late Bajezid, the benefactor; may God forgive his sins; to cure the ill, to relieve the aggrieved, to get rid of the passion of love and as a nutrition to the souls of the crazy, had arranged 10 professional singers and 10 musicians, of which 3 were only singers, 1 was a Neyzen, 1 was a violin player, 1 was a musikar (Pan flute) player, 1 was a Santur player, and 1 was an Ud player. They came 3 times a week to apply a session of music to the patients and the mad.”

According to these sources, during the execution of these passive-receptive music therapy sessions, which developed with the ripened tonalities of Turkish Art Music - which has its origin in Horasan (Transoxiana) - and Horasan Anatolian music, the patients would listen either by sitting comfortably or lying down in a resting position. In this form of curing, the aim was to relieve the patient by changing their emotional states and help them rekindle their self confidence.

ha ha ha ...nothing from this it is true....sales trick only

Who cares? Listen to the music..It sounds nice..This post is not intended for promoting the idea..It's the music that matters..You get whatever you want to get from it..:)

Nassos listen and tell us. :)

Filiz, you are right. I listen to the music but I don't loose myself to every music.
All nations claims the same: their music it also have curative properties....like every religion!!
Pano, I have listen this music, but my perceive didn't match with the description mentioned.