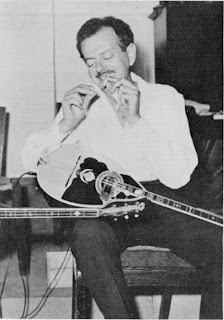 Vasilis Tsitsanis is considered to be one of the greatest Greek composers, lyricists and singers of the 20th century (whose songs are heard even today). Also one of the major figures of rembetiko and (laiki mousiki) popular music of Greece.

Vasilis Tsitsanis was born in Trikala on 18 January 1915. From an early age he showed an interest in music and got violin, mandolin and bouzouki courses. In 1936 he went to Athens to study Law. In 1937 he made his first recording. During 1937-1940 he wrote great songs that he recorded with the voices of Dimitris Perdikopoulou, Stratos Pagioumtzis, Markos Vamvakaris, Apostolos Hatzihristos and Stellakis Perpiniadis on many recordings in which Tsitsanis participated as a second voice.

During the German occupation Tsitsanis stayed in Thessaloniki. There he wrote some of the best songs, which were recorded after the end of the war.

In 1946 he settled in Athens and began to record, beside the known singers, such as Sotiria Bellou, Ioanna Georgakopoulou, Ninou Marika and Prodromos Tsaousakis.

In his first pre-war period of his discography (1937-1940) he recorded more than 100 songs (87 under his own name). In the after-war period (1946-1960) he recorded more than 300 songs most of which are sung by the majority of the Greek people. One of the ingenious Greeks of that time, the painter Giannis Tsarouhis said in 1966 “Tsitsanis is the only proof that we have civilization”. After 1960 there were more than 300 songs recorded on 45s and 33rpm, records.

The following years Tsitsanis enjoyed widespread acceptance. He died on 18 January 1984 in London, and was buried in the first cemetery of Athens.