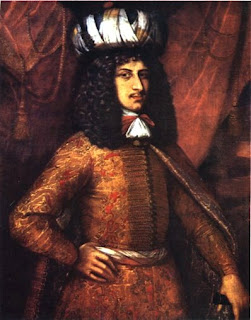 Dimitri Kantemiroglu (1673 –1723) was twice Prince of Moldavia (in March-April 1693 and in 1710–1711). He was also a prolific man of letters – philosopher, historian, composer, musicologist, linguist, ethnographer, and geographer.Dimitrie was the son of Moldavian Voivode Constantin Cantemir.Remnants of Cantemir's mansion in Istanbul, located in Fener, on the grounds of the Cantacuzino estate.His education began at home, where he learned Greek and Latin and acquired a profound knowledge of the classics. Between 1687 and 1710 he lived in forced exile in Istanbul, where he learned Turkish and studied the history of the Ottoman Empire at the Patriarchate's Greek Academy, where he also composed music.During his stay at Istanbul he studied the Turkish language and music, in which he afterwords excelled to such a degree, that he was the first introducer of musical notes among the Turks, and composed several pieces of music.He had around 40 compositions in the Ottoman music of which few are performed today, but his greatest service to the Ottoman music is the fact that he helped survival of 350 instrumental pieces by recording them in a certain notation (the ebced) script he developed in his work Edvar which he presented to Sultan Ahmed II.The most recent publication of his abovementioned work, reprint along with complete transcription and explanations, is: Kantemiroğlu, Kitâbu 'İlmi'l-Mûsiki alâ Vechi'l-Hurûfât, Mûsikiyi Harflerle Tesbit ve İcrâ İlminin Kitabı, Yalçın Tura, Yapı Kredi Yayınları, Istanbul 2001