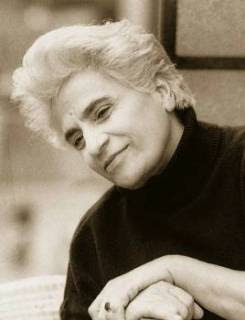 DOMNA SAMIOU
Domna Samiou was born on 12 October 1928 in Kesariani Athens. Her parents were refugees from Asia Minor, and lived in a village, Baintiri, outside Izmir. Her mother came to Greece after the disaster, and her father four years later, «because he remained there as a prisoner». She was introduced to Greek folk music at an early age by her parents, as she admits in an interview. In this way she grows up and loves the folk songs and music.
At the age of 13 years she becomes actively involved in music. She goes to "Association for Diadosin of National Music", where she is taught by the intellectual supporter, researcher and teacher of Greek Music, Simon Karras. There she takes the first courses of Byzantine music and discovers the secrets of the traditional songs. Also, at that time she attends the nocturnal Gymnasium.
From 1954 till 1971 she works at the National Radio Institute (E.I.R) along with the Greek Television (E.R.T) where she takes part in the preparation of a series of musical documentaries titled "Musical Journey". This preparation will help her gain a rich reservoir of musical materials, which proved important, aiming at the preservation of traditional Greek music.
In 1971, a milestone year for her future course, she performs traditional songs on the stage together with Dionissis Savvopoulos. But her singles and Lps have already been popular in Greece, France and Sweden since1960, which represent the impact of her work mainly in Greece and the Greek Diaspora.
Against the commercial abuse and the popularisation of Greek tradition, she begins to show over the years her most authentic performance. She not only gives countless concerts in which she sings in her own authentic way, but also presents original and creative artists of the folk tradition.
Her works go beyond the Greek borders and the Greek language. She becomes well-known in many countries of Europe, America and cities in Australia, where she gives concerts.

The most important stations in her career
- At the "Odeon of Herodes Atticus" singing for four consecutive years (1995-1998).

- Great recognition given from the "Megaron Musikis (Music Hall of Athens), where she performs her "Border Songs" (May 1995) and Greek traditional carols (Christmas 1996)

- In 1981 she creates the Artistic Society of Traditional Music "Domna Samiou", where she continues the same quality and a remarkable record production.

- In addition, from 1994 to 2001, she gives lessons on folk song music at the Museum of Greek Popular Musical Instruments in Athens.

- In 2006, she receives the Arion Award for her total contribution for the preservation of the Greek folk music.
The Domna Samiou continues today investigating and recording traditional Greek music.
The depth of her knowledge of traditional Greek music as well as her long experience and accuracy in performing the music style of each region, make her unique in this sector.

Adoption from Wikipedia and the Greek text, Panos and Filiz

Sas euxaristw poli, for these good article and videos.