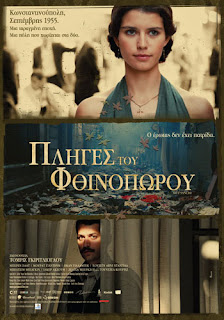 The film, almost entirely shot in and around Beyoğlu with great assistance from Beyoğlu Mayor Ahmet Misbah Demircan, reflects Istanbul on the screen as it was in 1955. Naz Erayda, Nilüfer A. Giritlioğlu and Erol Taştan are the art directors of the film, each set, costume and accessory of which was meticulously and painstakingly prepared by a thorough research of Istanbul as it was in 1955.

Set in 1955, “Güz Sancısı” depicts the story of Behçet (Murat Yıldırım), the idealist and nationalist son of a rich land owner who falls in love with his Greek neighbour Elena (Beren Saat) across from his apartment and engages in a private settling of scores with his feelings and political ideas in the setting of the 6-7 September incidents.

Behçet’s father Kamil Efendi (Tuncel Kurtiz) is a wealthy land owner in whom the government has a close interest due to his strong influence in the region and who has close links with the “deep” powers within the country’s bureaucracy. A young man cast under the shadow of his father’s strong personality, Behçet’s greatest ambition is to heed Kamil Efendi’s suggestions and take his place and rise in the world of politics. His strongest supporter in realising this goal is Kenan Bey (Hüseyin Avni Danyal), his father’s close friend and the father of his fiancée Nemika (Belçim Bilgin Erdoğan). A former bureaucrat himself, Kenan Bey is among the top executives of the “Cyprus is Turkish Association” and gives direction to deep state operations.

Behçet is conservative, calm, serious, introverted and also places great value on justice and ethics. This causes him to be often disturbed by developments in the world of politics, but he basically believes his nationalist outlook is correct, fair and realistic. He believes the Turkish nation was under siege by the western powers and that this situation was most obvious in Cyprus. In fact, he also experiences this feeling of being under siege very strongly in his private life and he falls in love with his Greek neighbour Elena. As the darkness of the tense political atmosphere slowly descends upon Beyoğlu, the uncontainable love between the two young people is trying to defend itself. As Behçet walks the political line drawn by the ever darkening colours of a militant columnist, every step he takes towards the morning of September 6th makes it harder for him to reach Elena. The two lovers who are forced to carry the heavy burden of the Turkish political life are on the “same” side in the land of love but on “different” sides in the land of their country.

Tomris Giritlioğlu and her team who have together completed very successful projects to date including “Çemberimde Gül Oya” (My Rose Embroidered Scarf) and “Hatırla Sevgili” (Remember Darling) are bringing back the past to the present once again with the film “Güz Sancısı” (Pains of Autumn). With this special project she has been working on since 2002, Tomris Giritlioğlu is making a comeback as a film director after ten years. The director’s last film “Güz Sancısı”, along with “Suyun Öte Yanı” (The Other Side of the Water) and “Salkım Hanım'ın Taneleri” (Mrs. Salkim’s Diamonds) completes the trilogy she has set as a career goal. The film will be shown in film theatres as of 23 January 2009.

The film is produced by C Yapım and Film, distributed by Özen Film and shot in cooperation with Asis Yapım. Starring in “Güz Sancısı” are Murat Yıldırım, Beren Saat, Okan Yalabık, Belçim Bilgin Erdoğan, İlker Aksum, Hüseyin Avni Danyal, Umut Kurt, Avni Yalçın, Tuncel Kurtiz and Zeliha Berksoy. The screenpay, co-authored by Etyen Mahçupyan and Nilgün Öneş is based on a novel by Yılmaz Karakoyunlu under the same title. The novel also won the Writers Association of Turkey Novel Award in 1992.

You can watch the film in these cinemas: