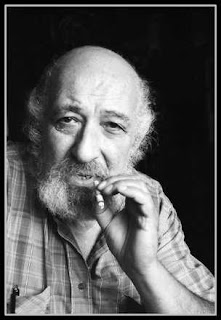 Ara Guler, one of the most distinguished and internationally renowned of creative photographers, was born in Istanbul in 1928. While still at Lycee he took up various types of work in the film studios, while at the same time following theatre courses run by Muhsin Ertugrul with the ambition to be a stage director or a playwright. He began his journalistic career in 1950 on the Yeni Istanbul newspaper while still a student at the Faculty of Economics. On completing his military service he began work on the Hayat magazine, where he was employed until 1961 as head of the photographic department. When Time-Life opened an office in Turkey, Ara Guler was engaged as correspondent for the Near East. This was followed by his employment as Near East photographic reporter for Paris-Match and Der Stern. It was during this period that he made the acquaintance of Henri Cartier-Bresson and joined the Paris Magnum Agency. In 1961 he was selected by the English publication Photography Annual as one of the seven best photographers in the world, and in the same year he was accepted as the sole Turkish member of ASMP (American Society of Magazine Photographers). In 1962 he was awarded the title Master of Leica, an honour accorded to very few photographers, and in the same year, the Swiss periodical Camera, the most important publication in the world of photography, devoted a special issue to his work. In 1964 photographs by Ara Guler were included in a work by Mariana Noris printed in the USA entitled Young Turkey. In 1967 an anthology entitled Photography of the World containing photographs by Ara Guler and Richard Avedon was published in Japan. An album of photographs entitled Turkei was published in Germany in 1970. Some photographs on the subject of art and the history of art appeared in the literary sections of Newsweek, Time-Life and Horizon, and were used by the Swiss publishing house Skira. Ara Guler furnished the photographs for Lord Kinross’ Hagia Sophia, published in 1971. The cover photograph on the English, French and German versions of Picasso, Metamorphose et Unite, published by Skira to celebrate Picasso’s 90th birthday, was by Ara Guler. Works by Ara Guler were exhibited in Glimpses of the Human World in Canada in 1967, Ten Masters of Colour Photography in the New York Gallery of Modern art in 1968, and the Fotokina Fair in Koln in the same year. In 1972, an exhibition was opened in the Bibliotheque Nationale in Paris. In 1975 he was invited to the United States, where he took photographs of a number of famous Americans, and an exhibition entitled Creative Americans composed of photographs taken during this trip was opened in several large cities throughout the world. About the same time, Ara Gdler interviewed and took photographs of various famous personalities from Bertrand Russel to Winston Churchill, Arnold Toynbee to Picasso and Salvador Dali. The most famous of these photographic portraits was that of Picasso who was well known for his refusal to sit to photographers. In 1979 Ara Guler was awarded First Prize by the Association of Turkish Journalists for his work in the field of photographic journalism. In 1980 a number of his photographs were published in book form by the Karacan Press under the title Photographs. In 1986 he supplied the photographs illustrating the book Mimar Sinan written by Abdullah Kuran and published by the Hurriyet Foundation. The same book was published in English in 1987 by the Institute of Turkish Studies. In 1989 photographs of famous personalities in the world of the cinema were collected by Hil Publications under the title The Movie World of Ara Guler. In 1991 he supplied the photographs to illustrate the book The Sixth Continent written by Cevat Sakir Kabaagac (the Fisherman of Halicarnassus) for the Turkish Ministry of Foreign Affairs. Meanwhile, Ara Guler had travelled over most of the world apart from South America, and the photographs taken during these travels had been distributed throughout various countries by the Magnum Agency and printed in various newspapers and periodicals. From 1989 onwards he worked in Indonesia, Malaysia and Brunei with the most distinguished photographers in the world on the programme A Day in the Lfe of.. His photographs of the works of the architect Sinan, a subject on which he had worked for many years, were published in France in 1991 by Edition Arthaud, and in the U.K. and U.S.A by Thames and Hudson in a deluxe edition entitled Sinan, Architect of Soliman the Magnjicent. The same year saw the publication of a book published in the U.K. and U.S.A by Thames & Hudson under the title Living in Turkey, in Singapore by the Archipelago Press under the title Turkish Style, and in France by the Albin Michel Press with the title Demeures Ottomanes de Turquie. A large number of Ara Guler’s photographs are to be found in the Bibliotheque National in Paris, the George Eastman Museum in Rochester U.S.A., and the Nebraska University Sheldon Collection. His photographs are also exhibited in Das Imaginare Photo-Museum and the Ludwig Museum in Koln.