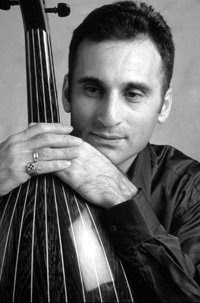 Yurdal Tokcan is considered one of the finest oud players in the world today by many music authorities. His style combines older traditions with many new stylistic innovations, which are also present in his playing of the fretless guitar. His many new compositions combine traditional rich melodies with polyphonic textures performed on Turkish classical instruments.
Tokcan was born in Ordu on the Black Sea cost of Turkey in 1966. He is a 1998 graduate of Istanbul Technical University’s Turkish Music Government Conservatory. While completing his masters program there, he joined the faculty as an oud instructor. Tokcan continues to teach, sharing his knowledge, experience, and technique with Turkish and foreign students.
In 1990, he joined the Culture and Tourism Ministry’s Istanbul Government Music Ensemble under the artistic direction of Tanburi Necdet Yasar. As a member of this ensemble, Yurdal performed in France, Holland, Belgium, and Spain. He is a member of the Istanbul Fasil Ensemble and the Istanbul Tasavvuf Music Ensemble, and a founding member of the Istanbul Sazendeleri (Musicians of Istanbul), a group dedicated to presenting Turkish instrumental works. Tokcan has participated in many recording sessions and has performed internationally, in Germany, France, Belgium, Netherlands, Spain, Greece, Japan, Turkmenistan, Israel, Tunisia, Lebanon, Bosnia, and Northern Cyprus. As a soloist, Tokcan performed in the Netherlands with the Amsterdam Percussion Group and Chamber Orchestra in a program titled European Music Around Oud, and with the Tekfen Philharmonic Orchestra in Turkey, the United Kingdom, and Belgium. Tokcan joined Burhan Ocal (percussion), Goksel Baktagir (kanun), Selim Guler (kemence), and Arif Erdebil (ney) in a French concert, the recording of which won the 1998 “Best Ethnic Album” in France. Tokcan has played in many of ney virtuoso Kudsi Erguner’s ensembles, both in Turkey and abroad. He performed in Israel with Group Baharat and with long time collaborator, kanun player Goksel Baktagir. Recently, Tokcan has been recording and performing with Israeli Ladino artist Hadass Pal Yarden. His work can also be heard on “Bende Can” (Inner Soul), an album of his original compositions.

Tokcan represented Turkey in several international festivals and celebrations, including the 3rd International Oud and Lavta Festival in Dresden, Germany and the 2002 International Oud Meeting in Thessaloniki, Greece (along with oud players Ara Dinkjian, Simon Shaheen, Haig Yazdjian, and Omar Bashir). In 2003, he performed at the Oud Festival in Jordan, gave two concerts at the Arabic Music Festival at the Cairo Opera Hall, and performed during celebrations of the 2003 Turkish Year in Japan. Tokcan was invited to perform in Kudus in a pan-Mediterranean music festival (along with Selim Guler, Ross Daly, Zohar Fresko and Yinon Muallem). He has performed with the Mercan Dede Ensemble in various festivals, including the Akbank International Jazz Festival in Istanbul.