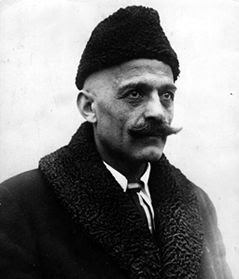 Biography
Gurdjieff was born in Alexandropol (Gümrü), Armenia to a Pontic Greek father and an Armenian mother. The exact year is unknown; anything from 1866 to 1877 has been offered. James Moore's biography ("Gurdjieff: The Anatomy Of A Myth") argues pursuasively for 1866. Gurdjieff grew up in Kars, traveled in the Near East before returning to Russia and teaching in Moscow and St. Petersburg in 1913.
In the midst of revolutionary upheaval in Russia he left Petrograd (St. Petersburg was renamed Petrograd on September 1, 1914) in 1917 to return to his family home in Alexandropol. During the Bolshevik Revolution he set up temporary study communities in Essentuki in the Caucasus, then Tuapse, Maikop, Sochi and Poti, all on the Black Sea coast of Southern Russia where he worked intensively with many of his Russian pupils.
In mid-January 1919 he and his closest pupils moved to Tbilisi. In late May 1920 when political conditions in Georgia changed and the old order was crumbling, they walked by foot to Batumi on the Black Sea coast, and then Istanbul. There Gurdjieff rented an apartment on Koumbaradji Street in Péra and later at 13 Abdullatif Yemeneci Sokak near the Galata Tower. The apartment is near the tekke (monastery) of the Mevlevi Order of Sufis (founded by Mevlana Jalaladdin Rumi) where Gurdjieff, Ouspensky and Thomas de Hartmann experienced the sema ceremony of The Whirling Dervishes. In Istanbul Gurdjieff also met John G. Bennett.
In August 1921 Gurdjieff traveled around western Europe, lecturing and giving demonstrations of his work in various cities such as Berlin and London. In October 1922, he established the Institute for the Harmonious Development of Man south of Paris at the Prieuré des Basses Loges in Fontainebleau-Avon near the famous Château de Fontainebleau.
In 1924 he nearly died in a car crash. After he recovered, he began writing All and Everything originally written by him in Russian and Armenian. He stopped writing in 1935 having completed the first two parts of the trilogy and only having started on the Third Series which had been published under the title Life is Real Only Then, When 'I Am'.
In Paris, Gurdjieff lived at 6 Rue des Colonels-Rénard where he continued to teach throughout World War II.
Gurdjieff died on October 29, 1949 at the American Hospital in Neuilly-sur-Seine, France. His funeral was held at the St. Alexandre Nevsky Russian Orthodox Cathedral at 12 Rue Daru, Paris. He is buried in the cemetery at Fontainebleau-Avon.

His music:
Consideration of Gurdjieff's music begins with grateful tribute to his loyal and gifted amanuensis, the classically trained Russian musician Thomas Alexandrovitch de Hartmann (1866-1956). Although de Hartmann generously insisted, 'It is not "my music". It is his. I have only picked up the master's handkerchief ', it was he who arranged, scored and first played, the compositions which Gurdjieff inspired and indicated in essence. Gurdjieff, although not a proficient instrumentalist, variously attempted the piano, the mouth-organ, the guitar, and the portative organ on which, particularly in old age, he extemporised. He could score sufficiently to indicate the key signature and the fundamental melody. Altogether he commanded sufficient means to superintend a collaboration which Laurence Rosenthal has called 'unique in the history of music'.


Gurdjieff began his musical training as a choirboy in the cathedral of Kars, and was enthusiastic enough to seek (though unsuccessfully) entrée to the Archdeacon's choir in Tiflis. As an adult he acquired an intimate knowledge of Middle Eastern and Central Asian traditional and religious music. He also had an impressive command of Western speculative music and of 'mantric chanting' .

In all Gurdjieff composed around 200 pieces. Most of the Movements and ballet music were created in the early years of the Gurdjieff/de Hartmann relationship; most of the programme music (short descriptive pieces - tender, witty, elegiac, religious, humorous, etc.) in the period of intensive work between 29th July 1925 and 1 May 1927, when the collaboration ended. A third and scarcely precedented category is identifiable as 'ideological music'; for example, 'Holy Affirming, Holy Denying, Holy Reconciling' correlates musically the Law of Three and the Law of Seven.

None of these compositions is a slavish pastiche of ethnic music. Rather Gurdjieff transmutes and recanalises the subtle essence of an ancient tradition, delivering it to modern man as a summons to awaken and a support for his effort to be. Gurdjieff's determination to influence the West led him to express an œuvre redolent of Asia on that archetypally European instrument the pianoforte - to introduce the unknown in terms of the known. It is true that de Hartmann's specialisation (he studied piano under Annette Essipov, a teacher of Prokoviev and Schnabel) predicated his choice - but it is equally true that Gurdjieff chose de Hartmann, preferring him over Vladimir Pohl.

Emphatic rhythms feature strongly in Gurdjieff's music, especially in the men's movements. Further musicological analysis must begin by recognising the constraints inherent in Gurdjieff's choice of instrument. His rich melodies are evoked within predetermined harmonic schemes. Analysis will find strong emphasis on the tonic, and, since the music is largely modal, scant recourse to modulation. Rather we find a prevalence of grace notes which, gliding into the adjacent tone, somehow impart the taste of quarter-tones (unplayable per se on the piano). A characteristic feature is the elision from a semi-tone to a minor third; a favourite mode is D E F G A B flat C sharp D (sometimes the E is flat). Intriguingly, small recourse is had to the scale adduced in Gurdjieff's Law of Seven. (This is the modern major scale, an inversion of the Greek diatonic Dorian - E D C B A G F E - the mode operated by the Demiurge in Plato's Timaeus.)

Although the Gurdjieff/de Hartmann music is - as yet - seldom brought to life outside authentic Gurdjieffian circles, a representative introduction to the œuvre, re-recorded from tapes of de Hartmann's playing, is now available on compact disc and cassette from Triangle Records, Triangle Editions, Inc., P.O. Box 452, Lenox Hill Station, New York, New York 10021. The definitive edition of the piano scores is under publication in Germany by B. Schott's Söhne (which produced first editions of Mozart, Beethoven and Wagner), the last of four volumes being due in 1992. Serious musicologists are referred to the de Hartmann papers in the music library of Yale University.